A Swiss Journey to Lausanne: The Royal Savoy Hotel & Spa 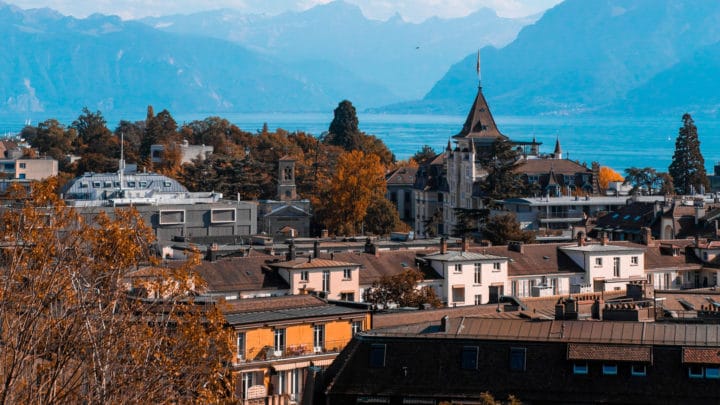 On the northern shores of grand Lake Geneva (or Lac Léman, as it is aptly called in this French-speaking area of Switzerland), sits the impossibly charming town of Lausanne, perhaps one of Europe’s best-kept secrets. Set against the impressive backdrop of Switzerland’s famed mountainous terrain, the Old Town in this medieval enclave is dotted with historic churches and quaint townhouses perched high up in the hills. The town then slopes down to the rolling green lawns of chic lakefront resorts and vast castle-like hotels at Lac Leman’s edge.

Though still somewhat off-the-radar in comparison to other parts of Europe and even in Switzerland itself, Lausanne is the second largest city on Lac Léman and is known as the Olympic Capital. With its famous Béjart Ballet, a multitude of museums, delicious cuisine (there is no shortage of heavenly chocolate or cheese here) a medieval Cathedral and a world-renowned university, the quiet Swiss-French city of Lausanne is a bustling center of activity and traditional Swiss-French culture. 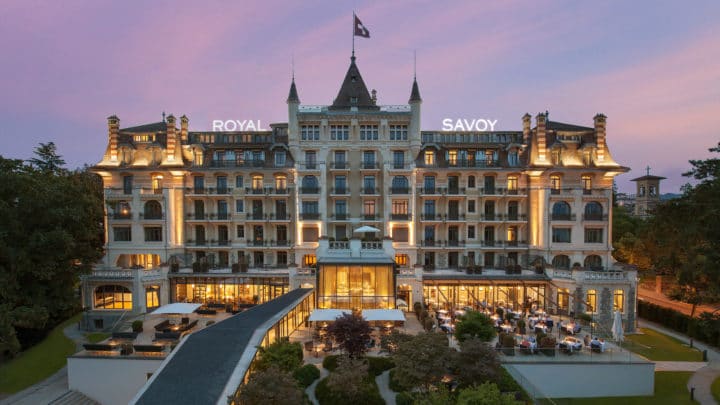 Exterior views of The Royal Savoy Hotel and Spa

A lovingly-restored Art Nouveau triumph, The Royal Savoy Hotel and Spa is one if Lausanne’s most luxurious and famed hotels, superbly located between Lake Geneva and the city center. Reopened in 2015 after an extensive five-year renovation, this truly legendary property now has 196 stunning rooms and suites, a renown brasserie and cigar bar, vast verdant gardens and a 1,500 square meter spa, as well as the incredible SkyLounge.

The Royal Savoy’s unforgettable panoramic rooftop with a 360° view of Lake Geneva, the sprawling Alps, and the charming city of Lausanne. It’s no wonder this historic property was once one of the favored haunts of royals and aristocrats from around the world, including the Spanish royal family, who called the hotel home for a time.

The property itself is split into two distinct sections: The Savoy Wing and The Park Wing. The Savoy Wing is housed in the property’s original building from 1909, and the rooms and suites all have a traditional Swiss ambiance and classic decor with either lake or city views. All include breakfast, access to the lavish Spa du Royal, and the 24-hour fitness center, as well as King, Queen, or Twin beds, Bulgari toiletries, Nespresso machines, and complimentary WiFi.

The Park Wing has 95 rooms that are situated in a more contemporary-style building with modern flare. Each room has a private balcony and the choice to add daily breakfast and Spa access if so desired.

The Royal Savoy’s historic restaurant, La Brasserie du Royal, boasts an amalgam of traditional French, Swiss, and modern cuisines, with trendy yet chic decor, and a warm elegance throughout all four different dining rooms, from the alcove to the terrace and the sprawling sunlit veranda. The slightly more relaxed yet equally refined Lounge Bar offers light bites and casual fare throughout the day in a gorgeous high-ceilinged room that invites guests to unwind and chat over whiskey, superbly-made craft cocktails, or a glass of wine chosen from an impressive list of the region’s best. 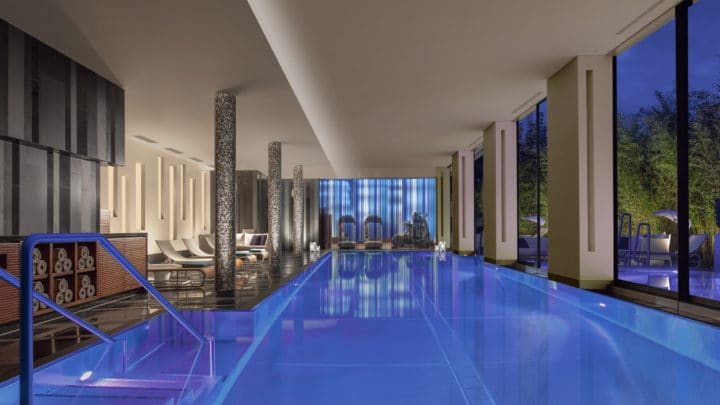 A visit to the 1500 square-meter Spa Du Royal is a must for any guest; it boasts multiple indoor and outdoor swimming pools, saunas, steam baths, ice fountains, relaxation areas, as well as an additional ladies-only spa, hair salon, fitness center and cosy treatment rooms. From specialized treatments like Biologique Recherche facials to aromatherapy body massages, the Spa Du Royal is an invitation to relax and recharge in luxury and style.

Contemporary interiors of the Lounge Bar

While Lausanne is an exceptionally charming and culturally rich city, The Royal Savoy is truly a destination unto its own, accessible by train from Geneva and other neighboring cities, as well as by helicopter or private jet from Lausanne-Blecherette airport, and by plane from Geneva airport (approximately a 60 minute drive), and Zurich Airport (approximately a 2 hour and 30 minute drive)