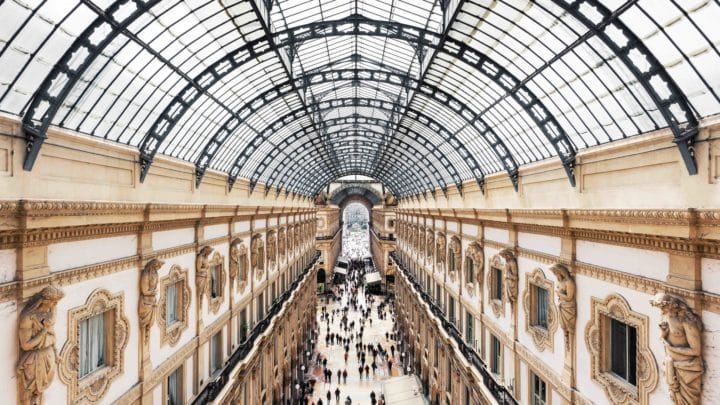 Italy is not known for its subtlety. It’s beloved for big history, big art and big bowls of pasta. But that doesn’t quite suit Milan, a city that’s more cosmopolitan, more concrete and a little less showy. There’s history, to be sure – including a little painting called The Last Supper – and a dash of flamboyance – don’t miss the Duomo – but the city doesn’t knock you out with sights the moment you arrive.

Instead, Milan’s charms come from the unexpected: the quiet, frescoed chapel next to a buzzing cafe, the lush courtyard behind a fascist facade. Milan isn’t always bathed in golden light, but it’s art, style and fashion to its core. For that reason, Vik Retreats, an art-loving import by way of South America, has found a spiritual home here.

Galleria Vik Milano celebrates art, culture and history in one of Milan’s most recognizable landmarks. This inimitable style comes courtesy of Carrie and Alex Vik, the powerhouse couple behind the coveted Vik hotels in Uruguay and Chile. This is a new venture for the Viks – the first city hotel, the first outside of South America and the first with more than a couple dozen rooms – but their ethos stays true. Vik hotels are all about exceptional architecture, warm service and, above all, living among art.

Just steps away from the lacy Duomo, Galleria Vik Milano is housed in one of the city’s most recognizable landmarks, the Galleria Vittorio Emanuele II. Built between 1865 and 1877, it’s the longest-running shopping arcade in Italy. The Galleria is home to Italy’s most iconic labels, like Prada, Versace and Armani, as well as historic purveyors, like Piumelli for handmade gloves, Mejana for fountain pens and Bocca, a historic bookstore for art-lovers. 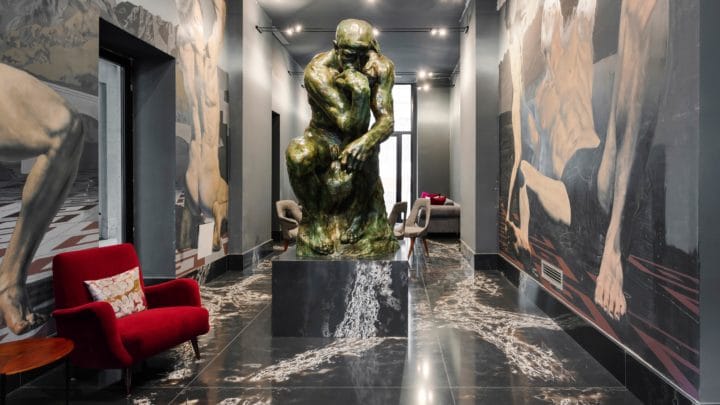 Taking up the former TownHouse Galleria, the Galleria Vik Milano is also an interplay of then and now. The lobby is guarded by a great bronze cast of Rodin’s The Thinker and a fresco of muscular Titans and mythological figures by Italian artist, Alex Folla. The hallways have been transformed into art galleries, showcasing immersive works alongside contemporary to antique furniture. 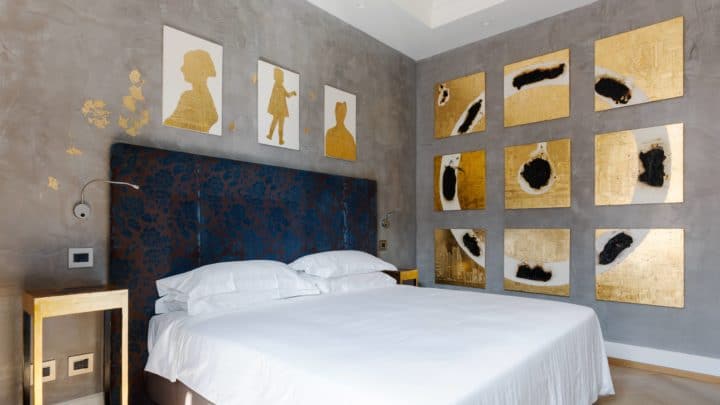 Hallways lead to 90 suites – just don’t expect the taupes and neutrals of your typical luxury hotel. Each of the suites is unique, many featuring site-specific artworks by Uruguayan, Italian and international artists. Some walls are finished with various colors of stucco veneziano, while others are splashed with hand-painted murals. Bathrooms are also unique, with marble or oversized artworks. 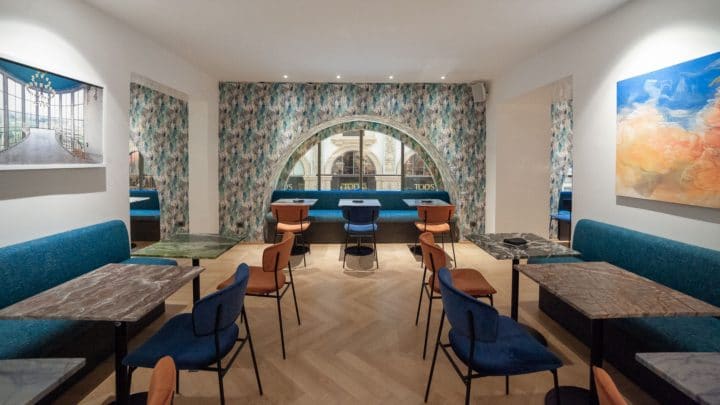 Continue upstairs and you’ll reach Vikissimo, the art-filled restaurant that overlooks the Galleria from arched windows. One of the most lovable things about Milan is the tradition of apericena, where pre-dinner drinks are served with snacks. The Viks make this tradition their own, serving wines are from their Chilean winery, Viña Vik. There’s also breakfast, lunch, dinner and late-night dancing.

Of course, this is Italy and there should be pizza. Luckily, the property came with a Neapolitan pizza shop named I Dodici Gatti after the 12 famous cats that live at the Galleria. Reserve a spot on the sliver of a terrace for views of the glass domes of the Galleria. A third restaurant named SPOtto is planned for fall 2019, promising a lively courtyard.

There’s more art outside your door – Milan is at your fingertips. The storied opera house, the Teatro della Scala, is just steps away. The Pinacoteca di Brera, where you’ll see Raphael’s The Marriage of the Virgin and Caravaggio’s Supper at Emmaus, is a ten-minute stroll. Milan’s modern marvels are on display at La Triennale di Milano, the city’s design museum.

And yet, you might find that your favorite piece of art in Milan is the one that hangs above your bed. After all, Milan’s charms come from the unexpected.